The 16 Best Cocktail Bars in Melbourne

Melbourne is at the forefront of Australia’s drinking culture, all thanks to its world-class bars; you’re definitely spoilt for choice. So here are our favourite cocktail bars to make the decision a little easier.

These Melbourne cocktail bars celebrate the golden era. A time spanning from 1860 to prohibition times. 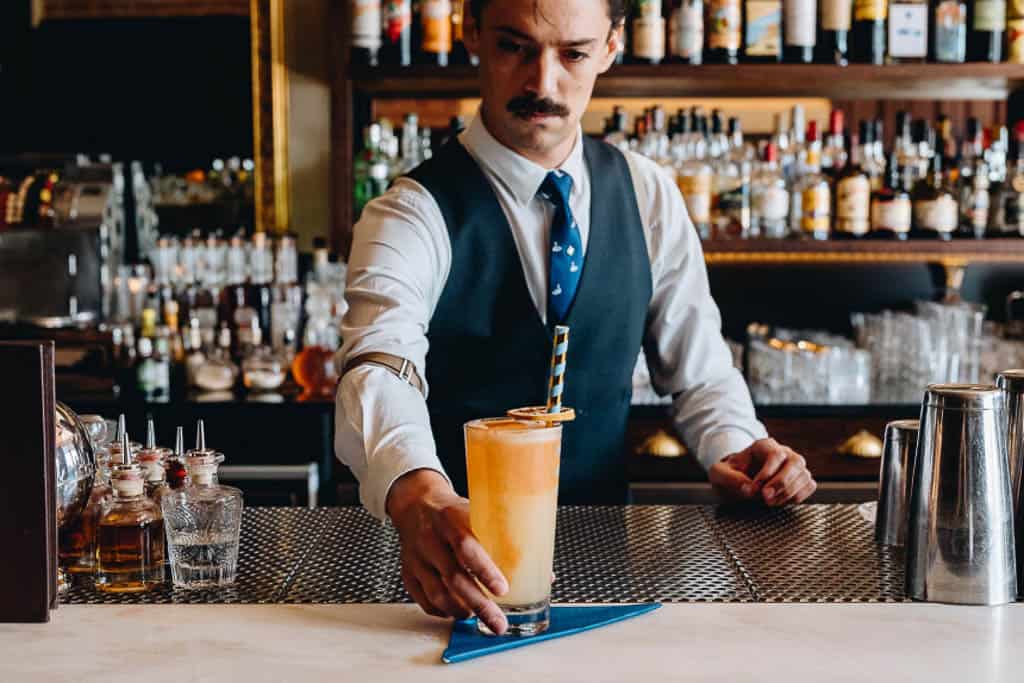 The Everleigh has taken out a spate of awards, including ‘The Best Victorian Bar of 2019’, and for good reason. This upstairs speakeasy takes its ethos from its world-renowned big sister, Milk and Honey in New York.

The interior and menu are inspired by the times of prohibition – think oakwood and dim lights – while some of the staff wear suspenders.

Our go-to cocktail is an amaretto sour, and The Everleigh makes the best we’ve had (their secret is a little touch of bourbon.) 1806 celebrates the year that the word ‘cocktail’ first appeared in print. Since opening in 2007, they have firmly cemented themselves in Melbourne’s cocktail scene.

The venue was previously a theatre restaurant; the stage has been converted into a bar, however, the mezzanine seating still remains.

1806 offers a selection of classic cocktails, all split into the era in which they were invented.

There is a small food menu available, and if you’re looking for a fun activity, 1806 also offers a mix of cocktail-making masterclasses. 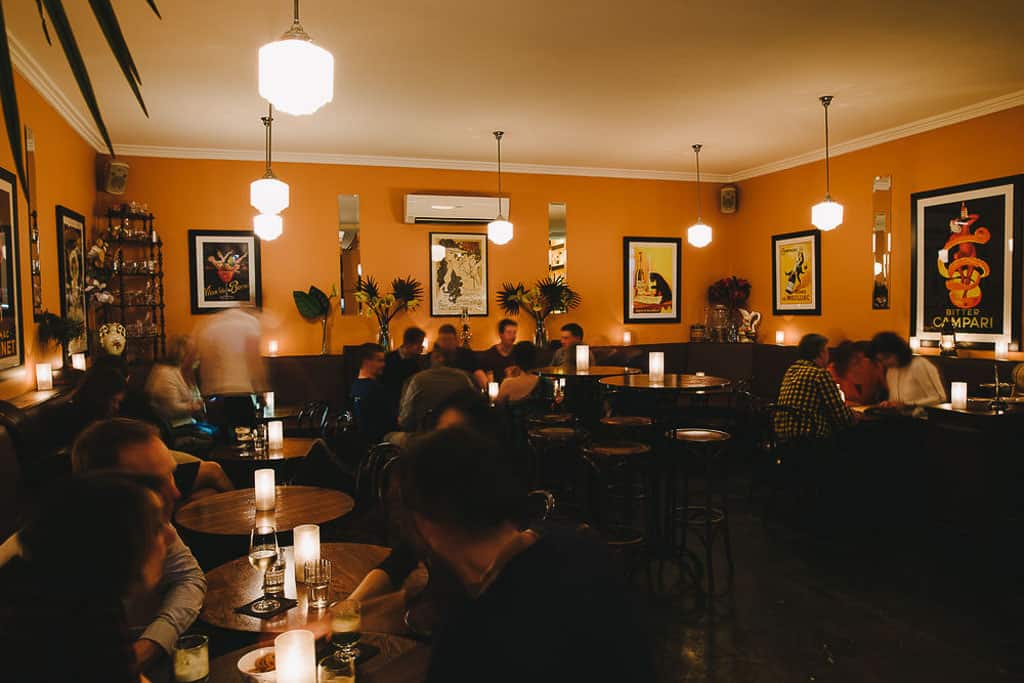 Meyers Place is one of the city’s best laneways, and home to several incredible venues, including Lily Blacks. This art-deco-style bar celebrates the golden era of cocktails: libations from before the prohibition area.

The bar is the centerpiece, backed by a towering pyramid of bottles. Surrounded by several seats to settle into and watch the world-class bartenders do their thing. The Black Pearl is a family-run bar that has been operating since 2002 and has since become a local institute; in 2018 they took out the best bar in Australasia.

Come the weekend it’s hard to secure a seat. But once you do you’ll be treated to a menu of perfectly crafted cocktails. There’s also a somewhat hidden bar upstairs, appropriately called The Attic.

Down laneways and through non-descript doors. These cocktail bars are hard to find. We’ve whiled away many, many evenings at Bar Margaux.

Winner of Bar of the Year, this French bar & bistro is an instant escape from the outside world.

Their cocktails are expertly concocted; Michael Madruson (one of the owners) honed his craft at Milk & Honey, a well-renowned cocktail bar in New York City.

The same team is also behind local favourite The Everleigh – inspired by the golden era of drinking – and Heartbreaker – a late-night rock ‘n’ roll bar.

Bar Margaux offers the classics; manhattans and martinis – which you can also order in the ever-adorable ‘snack-size.’ But you’ll also find their own creations on the menu.

Inspired by the French bistros of New York, you’ll find a food menu with escargot (snails smothered in butter,) duck frites, and The MGX Burger (a giant two-patty burger.)

Bar Margaux is on Lonsdale Street at the bottom of a non-descript staircase; look for the neon sign that simply reads ‘MGX.’

The opening hours are long, and the outside world effortlessly fades away as soon as you arrive.

Our Tip: Order the Americano Perfecto. It’s a plisner (beer) with Campari and vermouth – I’m told it’s Madrusan’s go-to cocktail when he’s around. 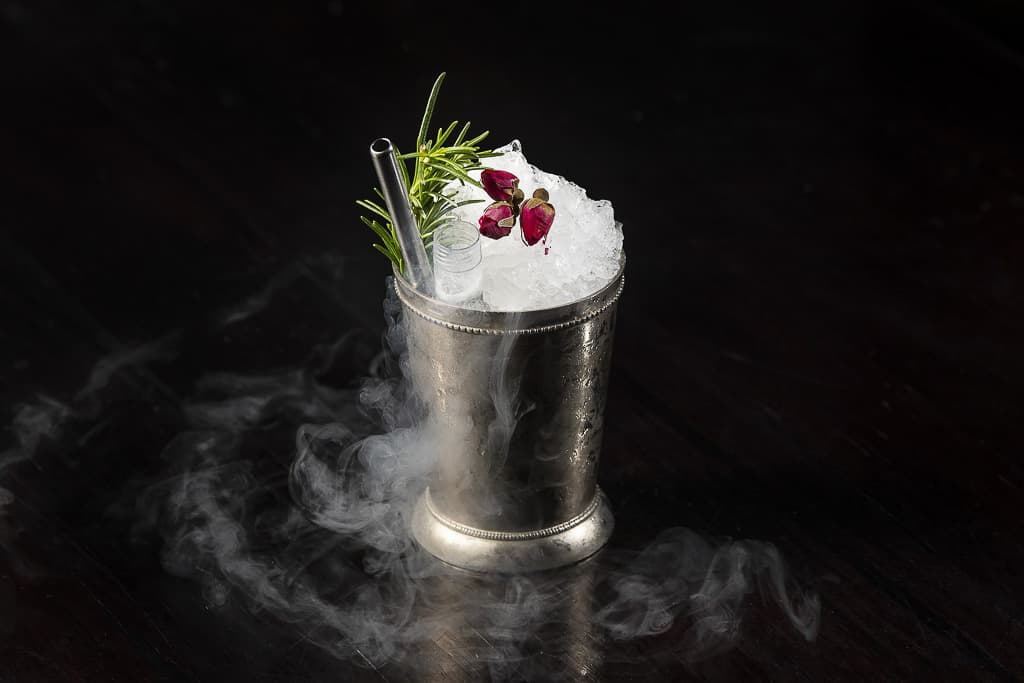 This hidden cocktail bar is down a very ordinary-looking laneway; the only giveaway is the vintage lamp above the wooden doorway.

Pull open the heavy wooden door and you’ll be thrust straight into the world of prohibition America.

The cocktails at Eau de Vie all feature an element of theatrics. The Espresso Zabaione is a favourite; an espresso martini topped with cream and then covered in liquid nitrogen. While their Yuzu Mule features housemade ginger beer and fresh yuzu.

The cocktail menu is massive, to the point of being overwhelming. But chat with the very knowledgable staff and they can make some recommendations.

The same team is also behind Nick & Nora’s – which you’ll also find on this list. And also Mjolner, one of Melbourne’s best-themed bars. This cavernous bar is hiding underground, down the unassuming Driver Lane.

Originally the space was the vault of the nearby General Post Office.

Their cocktails are intricately crafted, using housemade ingredients and some featuring a topping of liquid nitrogen.

If you are a whisky fan, there’s also a tasting vault that allows you to try some of their 160 whiskies.

These cocktail bars focus on locally made liquor. Enjoy a drink and support Australian makers. 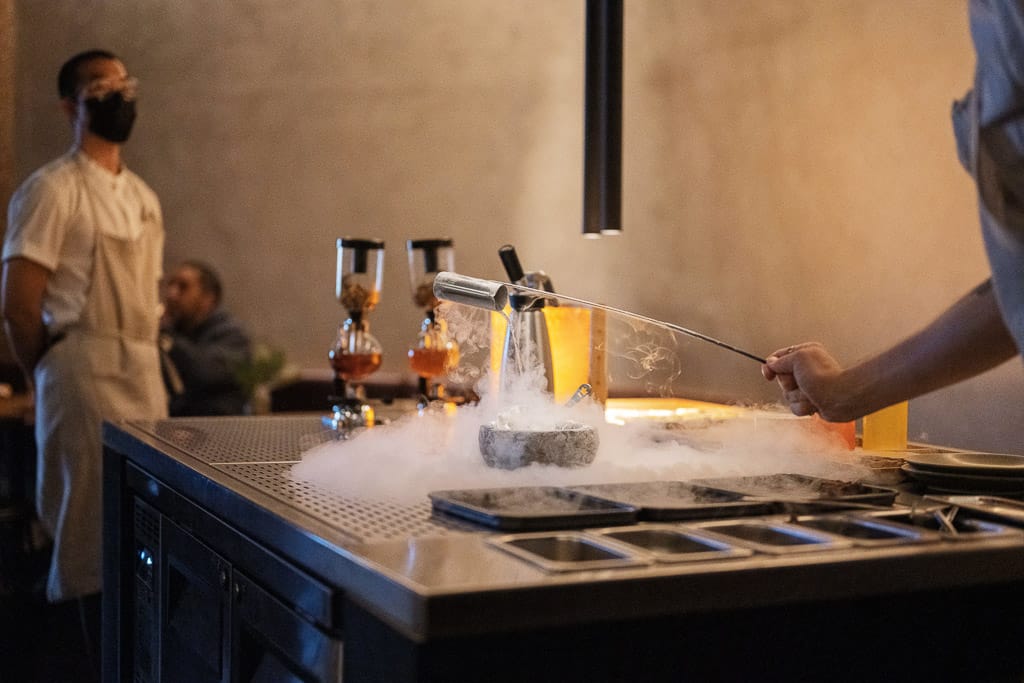 Byrdi comes from the couple behind Singapore bar Operation Dagger – voted within the world’s top 50 bars in both 2018 and 2019.

The setting is modern, minimal and allows the food and drinks to take centre stage.

Uniquely Australian ingredients are the focus at Byrdi; the cocktails feature seasonal ingredients and change regularly; an impressive amount of care goes into each drink. 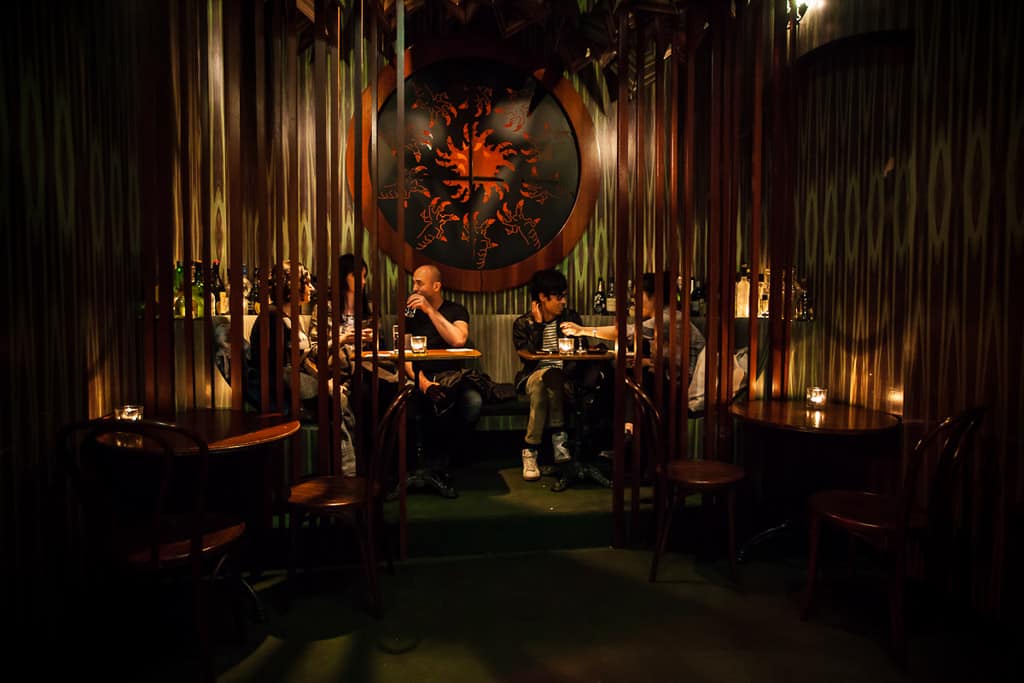 New Gold Mountain takes its name from the Victorian gold rush of the early 1850’s.

by 1851, many Chinese settlers had fled to Melbourne in the hopes of striking it rich in the gold mines, with many referring to Victoria as ‘New Gold Mountain.’

New Gold Mountain (the cocktail bar) took over a converted tailor’s shop and fitted itself out with a modern opium-den-like interior.

The Asian element is obvious, but the Australian touch can be found on the cocktail menu, with a focus on Australian spirits.

Wander down Liverpool St and look for the door with a bicycle hanging above. 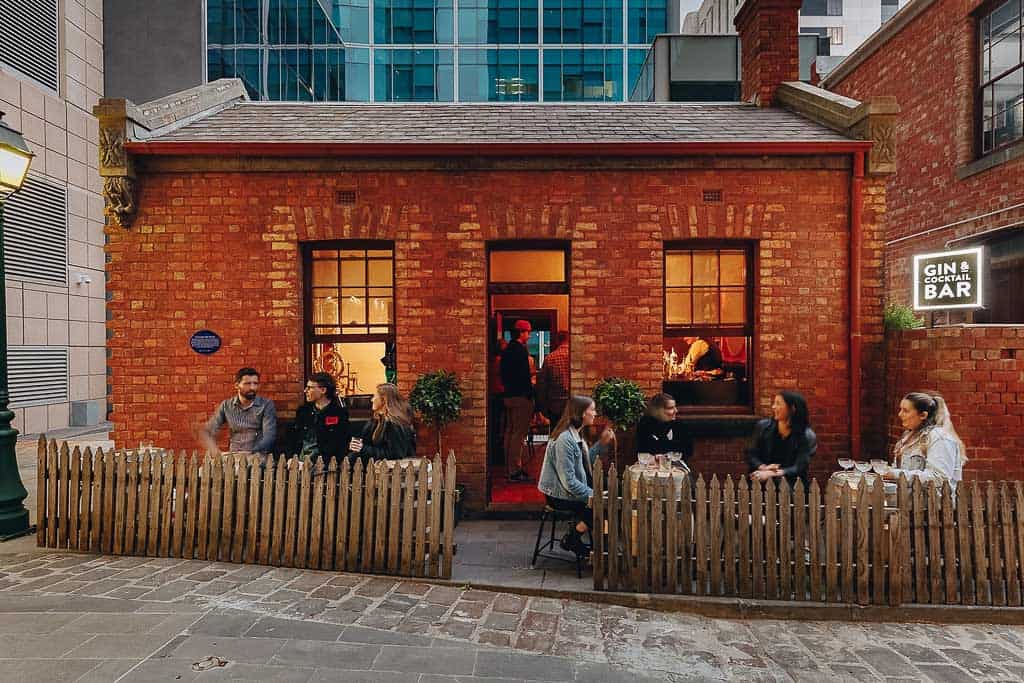 Little Lon is the only distillery in the city centre. This tiny gin distillery operates within a three-bedroom cottage built in 1877; it was once a brothel and the only building of its kind in Melbourne.

You can sip their gin varieties at their 20-seater bar. And if you love it, you can take a bottle home with you.

Little Lon also offers a gin masterclass, where you can learn about the history of the building and taste their range of gins. Juliet is an underground cocktail bar that showcases goods from local makers.

Descend the winding stairs into the dimly lit space, and select from mix of classic and modern cocktails.

You’ll find espresso martinis, Americanos, and whiskey sours, as well as seven variations on the much-loved gin and tonic.

The kitchen is streets ahead of many other cocktail bars, with a selection of sharable nibbles, charcuterie, and raclette – melted cheese served over baby kipfler potatoes.

Cocktail bars that will take you to another country. From the streets of New York to communist Germany. Berlin takes themed bars to the next level.

One half represents East Berlin, under the regime of dictator Joseph Stalin; it’s wartorn and dishevelled. The other side represents the West and runs under capitalism; it’s covered in gems and oozes opulence.

Regardless of which side you pick, you can enjoy some delicious cocktails. They also have a large range of gin & tonic variations.

Berlin can be a little hard to find. Look for the glowing sign of a bear, then take the stairs and ring the doorbell. The staff will let you in when they’re ready. This cocktail bar is all about opulence.

Nick & Nora’s is a cocktail and champagne bar inspired by the swanky, swinging times of the 1930’s. The art deco-styled space is massive, with a capacity of 240 people, across five separate rooms and two balconies.

It’s from the same team as Eau de Vie, Boilermaker House, and Mjølner – so expect theatrical cocktails with flair.

If you want to sip champagne, a glass starts at around $20 and goes up to $2200 for a bottle of Salon Cuvée ‘S’ Blanc de Blancs.

The 7 Best Themed Bars in Melbourne

Step into another world, where alcohol meets fantasy.
Read more 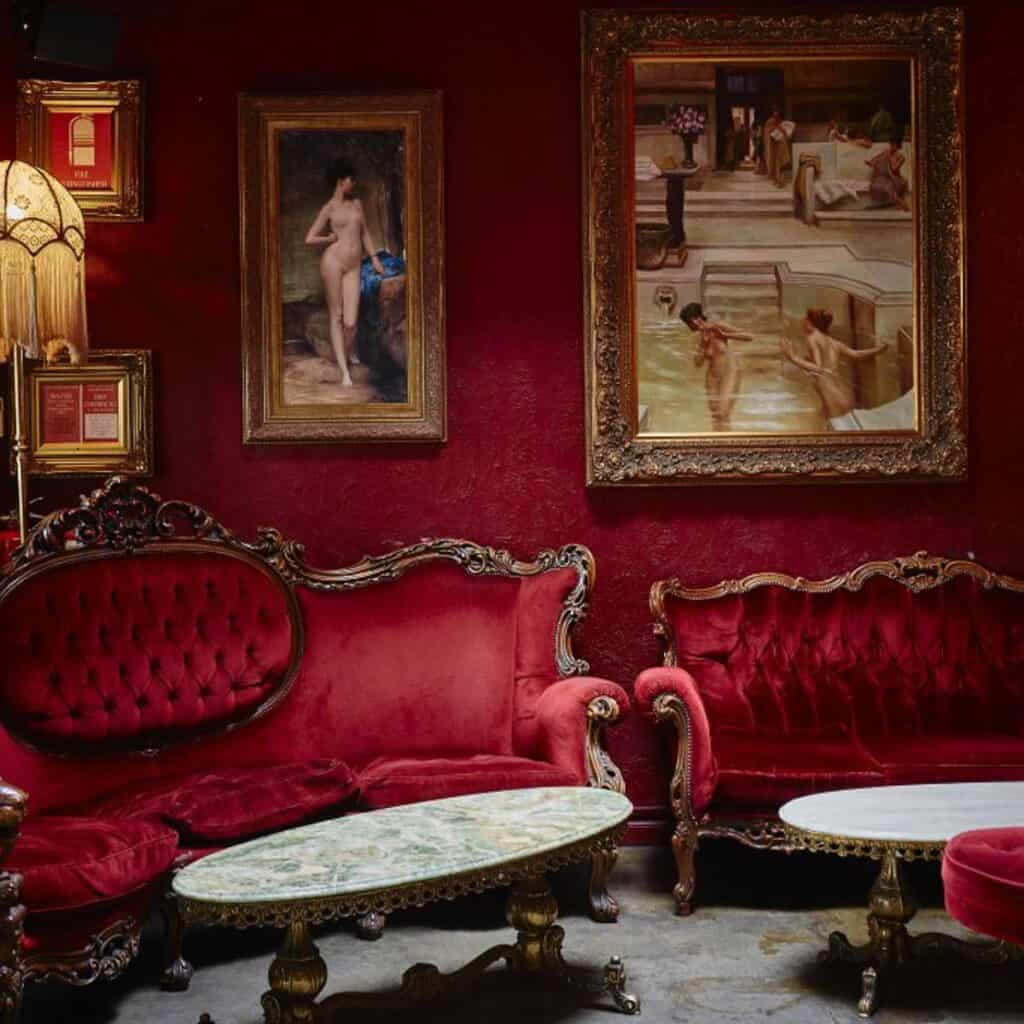 Polly is a Fitzroy institution, shaking cocktails since 1999.

Inspired by the Paris of the 1920s, this plush lounge offers cocktails, absinthe, and cigars. You’ll enter through their small courtyard, passing several statues of naked women. While inside you’ll find red velvet couches and old oil paintings.

The cocktail menu has variety. There’s the Melbourne Weather, a twist on a dark ‘n stormy made with tea-infused gin. And the Hot Buttered Banana served hot with banana rum.

There are over twenty other cocktails to choose from and a large portion can be made vegan, a welcome option for the Fitzroy crowd.

Find these bars down cobblestone laneways & drink like a local. Take a seat at this impressive circular bar, and settle in for a night of electric drinks. Out the back is the ‘Swamp Room’ – a secret escape covered in swampy greenery with an old-time piano.

Bar Ampere is the sister venue to Gin Palace; there’s a back passage that will take you straight next door – should you fancy a gin cocktail or two. 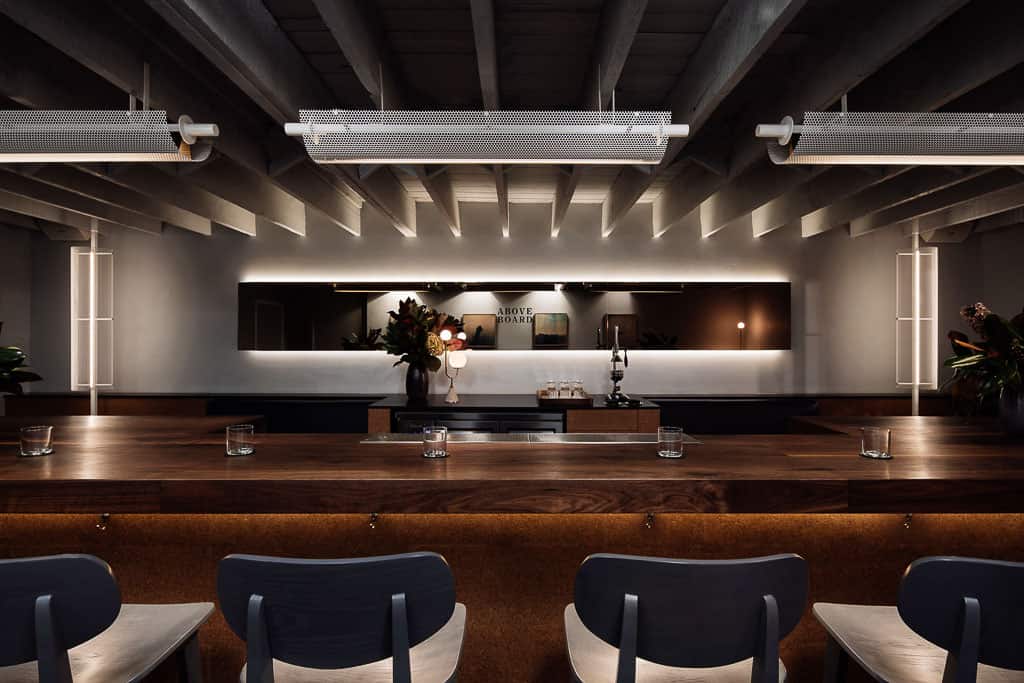 Above Board is one of a kind.

There’s no back-bar lined with bottles, in fact aside from the wooden bar, there’s hardly anything to be seen at all. And there are only 12 seats; absolutely no standing allowed.

And yet, Above Board been recognised as one of the top 100 bars in the world.

To find this gem, head past Beer Mash, down Chopper Lane and up the stairs. There’s a no booking policy, so best not to come with a large group. This laneway bar is easy to walk past. The signage is minimal, and it’s down a side street in Chinatown, but skip it at your own peril.

Union Electric takes its name from the Union Electric Lighting Company, which called the Heffernan Lane home back in the 19th century.

It is a small bar, but it has an intimate rooftop bar that’s popular with those in the know.

The cocktail bar has a portrait of American actor Bill Murray, which acts like the bar’s patron saint. We strongly approve – Suntory time! 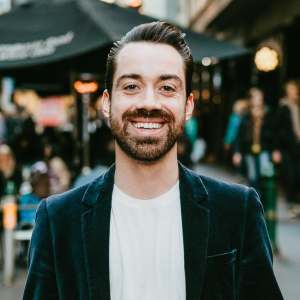 Taylor was born and raised in Tasmania. He moved to Melbourne to study Film & television, and went on to start a marketing agency for hospitality. Whilst in Melbourne he also founded a walking tour company. He has a love for rock 'n' roll bars & New York-style pizza. In 2020 he was amongst the top 1% of Frank Sinatra listeners on Spotify.
Contents: Cocktail Bars

The Best Street Art in Melbourne

The 24 Best Laneways in Melbourne

Sometimes you must experience other culture, to truly know your own.